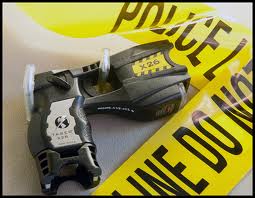 On July 21, 2011, Lareko Williams was tased by police after they say he was found beating and choking a woman at a Lynx light rail station in Charlotte. An hour later, Mr. Williams was pronounced dead. This death comes one day after a Charlotte federal jury awarded the family of Darryl Wayne Turner $10 million for his death after being tased by the CMPD. CMPD has now suspended their use of tasers for up to 45 days in order to make sure its tasers are working properly and to independently test the taser that caused Mr. Williams’ death.

Tasers are viewed as beneficial to those in law enforcement as a “non-lethal” option to subdue suspects. Many argue that tasers are much safer for suspects than other methods to subdue suspects such as a baton or other physical force. They also argue that tasers provide an alternative to lethal force when an officer has no backup. However, their use has become increasingly controversial in light of these serious injuries and deaths.

Tasers work in two different ways. One is called a “drive stun” where the taser is held directly to the subject without firing projectiles. The intent here is to cause pain, and thus this method is referred to as a pain compliance technique. Basically it is designed to cause pain in order to bring the subject into compliance, but on some subjects, such as those who are on certain drugs, the pain compliance technique does not work and other methods are needed to subdue an individual.

The other method of use is tasing an individual through shooting two electrode projectiles from the gun which are pointed, to ensure the projectiles can penetrate clothing and skin, and barbed, to ensure the electrodes cannot be removed. This method of use is not a pain compliance technique. Instead, the electrodes inject up to 50,000 volts into the body. All of this electricity interrupts the electric impulses that control the body and basically incapacitate a person. This use of the taser is effective even on those people on drugs that prevent them from feeling pain.

Ultimately there is no doubt that tasers have value for law enforcement officers and are effective at accomplishing their task. The question is whether the benefit outweighs the cost. Between June 2001 and March 2005, Amnesty International found that there were over 103 Taser stun gun related deaths, and as of May 2010, the number had grown to 390.

While the number of taser related deaths have increased in the last couple of years so too have the reports of alleged abuse of tasers. Such incidents have involved more vulnerable victims such as pregnant women, the elderly, children as well as repeatedly tasing suspects who are no longer a threat. Arnold and Smith, PLLC is a law firm located in Charlotte, NC that deals with both civil and criminal matters. If you feel you have been a victim in a similar type of matter, please do not hesitate to call at 704-370-2828.

Sources:
Police shelve Tasers for now after another suspect dies