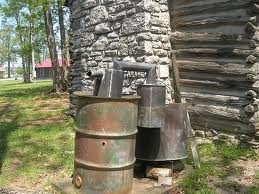 In a Catawba County home, deputies found a liquor still, 100 jars of “white lightning” moonshine, 40 firearms, 195 grams of marijuana, prescription drugs, and more than $13,000 in cash. The resident, Mr. Timothy Scott Fox, has been charged with possession with intent to sell and deliver marijuana, maintaining a dwelling for a controlled substance, possession and sale of non-tax paid alcohol, possession and sale of alcohol without a permit, and manufacturing liquor without a permit. Mr. Fox is now out on $15,000 bond.

Interestingly, this bust and subsequent arrest arose out of what is called a “knock and talk.” When police suspect that criminal activity is present at a location, but they do not have enough evidence to obtain a search warrant, many times they will knock on the door of a location to interact with the persons at the residence and hopefully obtain enough evidence to meet the probable cause requirement for a search warrant.

In this case, police stated that they knocked on Fox’s door, and as they talked with him, they became suspicious of what was inside the home. No facts are given as to what their basis for the search warrant actually was in this case, however, many different things can serve as the basis of a warrant. For example, the smell of marijuana can give rise to probable cause. Another possible scenario is if police look into the interior of a home and they see ingredients that either are contraband, or are typically associated with contraband. Actually seeing the liquor still in this case would obviously be enough for probable cause.

You may be asking what right police officers have to come to your door to investigate if they do not have a warrant. The answer is they have every right to perform a knock and talk if they do not have a warrant. Under the principle of voluntary contact, police officers can come to your door or approach you on the street and strike up a conversation or ask you questions. The catch is that at any time during voluntary contact, you have the right to leave or refuse to answer their questions. Unless police have reasonable suspicion that there is criminal activity going on, police have no right to enter your home or prevent you from walking away from them.

In this case, because police were only performing a “knock and talk”, Mr. Fox had no duty to open his door to the officers or speak with them. And it appears that by not asserting his rights, he is now in a whole lot of trouble. So keep in mind, you have rights. Do not be afraid to stand up for yourself and assert those rights if the police want to speak to you, enter your home, or search your car.

Police say they found moonshine and marijuana during knock and talk