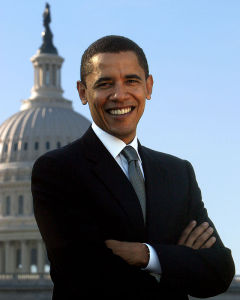 The President has no power to make, amend, to change or to choose to enforce or not to enforce certain laws. Unfortunately, President Obama has made a habit of acting like a King—like the very albatross our forbearers cast off at the founding of our nation.

Those forbearers created the Constitution to enable people they never met—us—to enjoy the blessings of freedom. They knew what it felt like to live under tyranny. They feared the government they worked to found would itself grow tyrannical. That is why they created separate branches of government, made them coequal, and established a series of checks and balances so that no one branch could marginalize the others.

Perhaps that fear of tyranny is something innately American. The flipside of fearing and fighting tyranny is loving liberty. Loving liberty is what we do when we defend the Constitution.

Imagine if a President—any President—simply suspended the Fourth Amendment rights of citizens—the rights not to be searched or seized but upon probable cause. The reason for the suspension, we would be told, was a suspected massive, impending terrorist attack. Thousands of Americans would be arrested and held without charge. Thousands of private homes and buildings would be searched by federal, state and local agents. Marshall Law would be declared.

What recourse would We the People have? A lawsuit? That wouldn’t do much good. And what difference would it make? If the President has the power to make law, then why not also exercise the power to interpret law? This would eliminate the need for a judicial branch. We could do away with Article III of the Constitution, do away with the courts and simply petition the King, our President.

Congress has spoken on immigration. It has passed many laws governing the conduct and processes of legal immigration to these United States. These legislative Acts, numbering in the dozens beginning with the Naturalization Act of 1790 and on through the Illegal Immigration Reform and Immigrant Responsibility Act of 1996, set out—in very clear terms—our nation’s rules, policies and procedures regarding immigration.

The most powerful single man in our political system—the President—says he thinks the immigration system is “broken.” He says he is “frustrated by years of congressional inaction” on immigration, and so “he is now prepared to use his executive authority.”

One of the largest news organizations of our age—Reuters—describes the President’s plan this way: “President Barack Obama will outline a plan on Thursday to relax U.S. immigration policy for as many as 5 million people, bypassing Congress and angering Republicans.”

The last statement—the President will anger Republicans—is interesting. It appears in the first paragraph of a story published early Thursday by writers Steve Holland and Richard Cowan. Isn’t Republican “anger” a little beside the point?

The President doesn’t care—that is obvious. His executive action, ironically, is just as dangerous to Steve Holland, Richard Cowan and all the Democrats cheering him on as it is to “angry” Republicans. It is even more dangerous to all the Americans going about their day-to-day business, who may or may not be paying attention, who pay their taxes and expect the government to “insure domestic Tranquility, provide for the common defence, promote the general Welfare, and secure the Blessings of Liberty.”

It is difficult to understand how not enforcing our immigration laws somehow fixes a “broken system.” What does the “system” have to do, anyway, with immigrants who are not availing themselves of the system? Aren’t undocumented immigrants “undocumented” in the first place because they entered the country in a manner inconsistent with our laws, rules and procedures?

The system is not broken, the will to enforce it is. It is hard to imagine how “domestic Tranquility” can be secured when our nation’s borders are not. Congress has acted dozens of times and passed thousands of pages of laws—still good and on the books—that the President simply refuses to enforce.

Now, tonight, he plans to formally rewrite the law, an action that will turn the Constitution on its head and all but eviscerate the legislative power of Congress.

Perhaps you agree with the President; perhaps you feel we ought to allow the immigrants who have come to this country seeking a better life to stay, to seek to enjoy the Blessings of Liberty we enjoy.

The founders of our country established a political process through which citizens—including you—might assert these beliefs, might seek to change the law, might seek to better our society and those living in it. That process is in danger of being destroyed, and the person whose voice will be silenced through that destruction is yours.

You may agree with this President, you may cheer his executive order, you may even take pride in sticking it to those “angry” Republicans and their Tea-Party supporters.

But what will you think when they get their man in the White House, and he starts unilaterally changing laws you like? Will you still be cheering?

The views and opinions expressed in this article do not necessary reflect the views or opinions of Arnold & Smith, PLLC.