Police in Charlotte arrested four people as they were trying to force their way into Bank of America’s annual shareholder’s meeting. Police were working to contain a crowd that had gathered outside of the meeting in the street. The arrests came as a result of the police using a newly passed city ordinance to declare the shareholder’s meeting an “extraordinary event” which allows the police to subject protests to more stringent regulations.

The new ordinance is found in Sections 15-310 through 15-313 of the municipal code. It gives the city manager the authority to declare an event an “extraordinary event” and also allows the city manger to prescribe the location and the time period for the event. 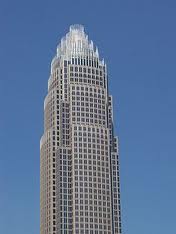 An “extraordinary event” is defined in the code as “a large-scale special event of national or international significance and/or an event expected to attract a significant number of people to a certain portion of the city.”

Section 15-313 sets out what kind of conduct is unlawful during the extraordinary event. It is unclear from the WBMF report what prompted the police to arrest the four individuals. The code section makes it unlawful to carry certain items, such as backpacks, posters, markers, and other items. There was no indication that any of those items were found on the arrestees. Charlotte-Mecklenburg Police Department Major Jeff Estes told reporters that the four were arrested for crossing a police line, a misdemeanor in North Carolina.

The protesters, along with several Bank of America shareholders, expressed their outrage and disappointment at how the banking institution has been handling the foreclosure debacle. More than 20 shareholders spoke during the meeting and all of them found fault with the bank’s handling of the issue, as well as its investments in payday lenders.

Those arrested during the protest will now likely face misdemeanor charges. If you need the services of a Charlotte criminal defense attorney for any reason, please call the attorneys at Arnold & Smith, PLLC at 704-370-2828. They can provide you with legal advice for your situation.