A recent online article discussed a seemingly boring but ultimately important issue that may be raised before the Supreme Court in a coming session: pocket litter. “Pocket litter” is a phrase used in law enforcement circles to refer to items of miscellaneous information carried on a person. This comes into play when a person is arrested or otherwise detained by an officer and are subject to some sort of search.

When law enforcement officers arrest someone, they conduct a thorough search of the suspect and his or her immediate possessions. 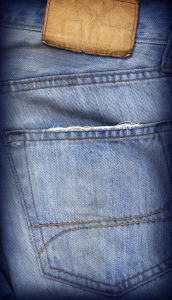 This is what is known as a “search incident to arrest.” Any and all items found during this search are deemed admissible in Court. During a typical search, officers are trained to look for items that might provide useful evidence for the case or that might cause harm to themselves or others. Another use of such searches is to gather information that might provide a clue about other individuals involved in the alleged criminal activity.

Seemingly mundane items found in people’s pockets or purses can provide a significant amount of information. Slips of paper with quickly written messages, phone numbers, names, addresses business cards, etc. all make for great leads. Beyond these obvious examples, scraps of paper including receipts, bus passes or airplane tickets also provide valuable information to those seeking to identify a suspected criminal and any possible criminal associates.

One thing that has happened on this front given the technological changes seen recently is that the items that often make up such pocket litter have changed. Originally the term referred only to small scraps of paper generally containing only a relatively small amount of information. Today, the term has grown to include electronic devices such as smartphones, tablets, iPods, and even laptops from which huge amounts of information can be collected. These devices carry voice mails, call and text logs, photos, Internet browser history and even GPS information.

The question facing many appellate courts today is just how far such a search can go when high value electronic pocket litter is involved. Cellphones, in particular, present a puzzling gray area, as there have been conflicting rulings between various U.S. Circuit Courts. This conflict makes it more likely that the issue will end up before the Supreme Court at some point to help clarify the issue. Judges confronted with such facts often find themselves lost, comparing cellphones to diaries while trying to analogize to prior cases from decades ago that have little if any relevance to the challenges they face today. The Supreme Court will more than likely be stepping in and shedding light on the issue, hopefully catching the legal system up to changes in technology.