Everyone knows that you shouldn’t litter. When most people think of litterbugs, they think of those who throw fast food bags out their windows while driving down the road. Most of these cases are punishable with small fines, but there are some instances where serious littering can result in serious punishment. 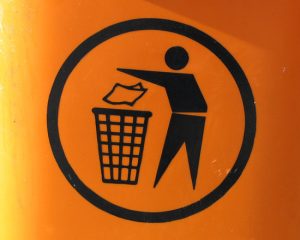 In North Carolina, most people imagine that littering is at worst a minor civil infraction, not a serious criminal matter. Annoying? Lazy? Sure. A felony criminal act? Surely not. Think again. If a person in North Carolina is found engaging in something like illegal dumping, they could find themselves facing a Class I felony.

Before we get to the possible punishments for littering, let’s back up and discuss a recent case in the news. Authorities in McDowell County, North Carolina, say that they recently discovered that someone had dumped more than 500 pounds of old food in a local creek. Police say they received complaints that someone had dropped off more than 520 pounds of garbage in Mill Creek.

The Sheriff’s Office says the trash was almost entirely food, consisting of mainly of old meat and bread. Given this, investigators believe it came from a restaurant or deli. Authorities have cleaned up the area to avoid creating environmental and pest problems, but aren’t content to let the matter rest. They are asking the public for information and are actively pursuing the person responsible for the illegal dumping.

Littering in North Carolina is against the law, plain and simple. Authorities outlawed littering because of the problems it can cause to the public. Wildlife and the environment suffers, the state spends millions of dollars picking up trash, including more than seven million pounds of roadside refuse last year. To discourage littering, law enforcement officials are empowered to hand down stiff penalties. If a police officer catches someone littering, the person could face a fine of up to $1,000, even for a first offense. The penalties rise to up to $2,000 for a second offense. Beyond the fines, offenders could receive points on their driver’s license, something that could result in higher insurance payments.

Beyond the more common examples of littering, there is a heightened category known as illegal dumping. Illegal dumping occurs when a person disposes of typically large amounts of waste in unauthorized areas. Depending on the specific circumstances, this illegal dumping can result in serious fines and charges ranging from misdemeanors to felonies.

The law says that any person who is found littering in an amount exceeding 500 pounds (the case in McDowell County was 520 pounds) or in any quantity for commercial purposes or who discards something that is hazardous waste, could face Class I felony charges. This means that someone convicted of illegal dumping could potentially face between three and 12 months behind bars, enough to make you think twice about properly disposing of your garbage.

Who dumped 500 pounds of food in western NC?