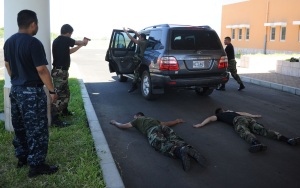 The equitable-sharing program has served as a boon to local law-enforcement coffers for years, netting Tar-Heel State law-enforcement agencies some $130 million since the program began—the fifth most of any state. Local agencies have kept about eighty-percent of that money.

Caldwell said law-enforcement officials are out to seize assets from criminals, not from law-abiding citizens.

Kenneth Lamont Clark’s attorney, however, told WRAL that just the opposite occurred in his client’s case. Clark’s case, lawyer Abdulhakim Saadiq said in a statement, “is a textbook example of innocent business owners with cash-intensive businesses being deprived of their lawfully obtained property upon the pretext of violating the law without any credible evidence.”

Defense attorney Damon Chetson told WRAL that when law-enforcement officials seize cash or assets allegedly tied to criminal activity, the burden shifts to the property owner to prove that the cash or assets were not related to criminal activity. Even if a person is completely innocent, Chetson said, there is no guarantee that the person will overcome that burden in a court of law.

Durham resident Mary Ford counted herself lucky when she was able to demonstrate that she was not involved in her son’s alleged drug dealing. “After a lengthy process,” WRAL reports, Ford was able to recover her own home, which agents had seized after Mark Ford admitted to selling drugs.