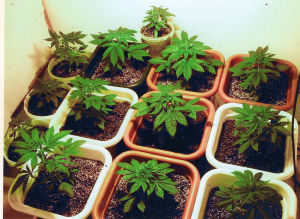 In addition to marijuana plants, many users employ a chemical process to formulate so-called “hash oil.” The oil is “a highly concentrated and viscous byproduct of marijuana often extracted with butane.” It is legal to produce the oil if the producer has obtained a license, but many users try to extract the oil themselves, with sometimes disastrous results. The Post-Intelligencer has chronicled the sometimes deadly home-hash-oil lab explosions and fires that have vaulted hash oil into the fore discussions about the ramifications of marijuana’s legalization.

Schochet said the purpose of the legal changes is to deter the home production of hash oil. Still, he conceded, the “gross misdemeanor” charge—at worst—would only result in a civil-infraction penalty… “something similar to a parking ticket,” the Post-Intelligencer reports.

Legislators are struggling with two conflicting goals: protecting the public health and reducing crime by decriminalizing marijuana. Legislators say they have a long way to go in ironing out the details. The process of squaring criminal laws with legalization is something any state that legalizes marijuana use may face.