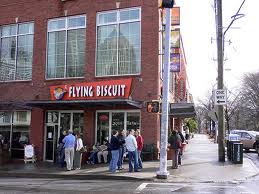 As mentioned in a previous post, the story of the ex-felon hired to work at a café who then allegedly killed a pregnant manager by fatally stabbing her during a robbery continues with new information being released. The newest information demonstrates the need for small businesses to perform background checks, as well as the risks taken when hiring employees with criminal records or the exposure to legal liability faced when failing to conduct thorough background checks on job applicants.

The Charlotte Observer reports that state records show the 22-year-old suspected killer was released from prison in November 2011, after serving nearly two years for robbery and breaking and entering. He is accused of stabbing the pregnant 25-year-old restaurant manager to death and prosecutors say he will also be charged with a second count of murder for the woman’s unborn child.

The Flying Biscuit Café in Charlotte, North Carolina also faces possible fines or other penalties from the Alcohol Law Enforcement (ALE) division for hiring the ex-felon since a state alcohol law does not allow businesses to hire felons convicted in the last three years for jobs that involve serving alcohol.

According to the article in the Observer, the cafe’s owner told ALE agents that no background check was performed on the suspect, even though he had acknowledged a past conviction during his interview. It’s uncertain though if the owner of the restaurant knew the nature of the previous conviction. The café worker was convicted in 2009 of robbing a drive-in restaurant where he worked and was put on probation for the crime but then sent to prison after subsequently being charged with breaking and entering.

If you or someone you know find yourself in need of the services of a Charlotte criminal defense attorney, please contact Arnold & Smith, PLLC for a free consultation at 1-704-370-2828. They promise to treat every client with dignity and respect and work hard to provide the best possible representation.