The United States Supreme Court is comprised of nine judges whose legal educations began at either Harvard or Yale. With the exception of Ruth Bader Ginsburg—who transferred to Columbia University School of Law—all nine obtained their law degrees from Harvard or Yale. 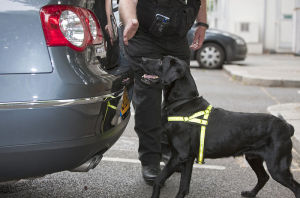 The (alleged) hoity-toity backgrounds of the justices—underscored in a January 22, 2015 Washington Post piece—came into laser focus in oral arguments in Rodriguez v. United States, according to Bloomberg News.

The issue in Rodriguez was whether police can use a dog to sniff for drugs around a vehicle during a routine traffic stop. Harvard Law Professor Noah Feldman, who observed the arguments, suggested the “browbeating… conservatives” and “assist[ing]… liberals” on the court, through their questioning of lawyers for Rodriguez and the United States, revealed their ideological divides.

Those divides—and who the justices are—both Bloomberg and the Post suggested, are important issues that sometimes define and nearly always, at least, inform their decisions.

With respect to traffic stops, at least a few of the justices—unlike many high-profile political leaders who use professional drivers and have not driven a car in decades—actually have experience with roadway traffic. In 2011, Justice Antonin Scalia was cited after rear-ending a vehicle on George Washington Memorial Parkway. Justice Stephen Breyer was hit by a car while biking in 1993, proving he has at least had contact with an automobile.

The justices’ contact with real-world traffic interactions and their perspective on the way state legal systems deal those interactions “could affect how police target motorists, which motorists they target and how often, and how they interact with motorists once they’ve pulled them over,” according to the Post.

Writing in the Post, Radley Balko observed that of the nine justices, only Samuel Alito and Sonia Sotomayor have actual experience working in the criminal justice system—both as prosecutors. Only Sotomayor has worked as a state-level prosecutor, in courts that prosecute traffic crimes, but that was only for a four-and-a-half period that ended thirty years ago.

Mr. Balko did yeoman’s work chronicling exchanges in oral arguments in which justices evince an academic approach to criminal cases, nearly always presuming good faith and rarely second-guessing the motives of law-enforcement officers. He cited a 2013 Tulane Law Review article authored by former police-officer-turned-law-professor Seth Stoughton, showing how the Court premises many of the constitutional rules its develops regarding police conduct upon “factual assertions” about law enforcement and officers that “are made entirely without support or citation, raising concerns about whether the Court is acting based on a complete and accurate perception.”

In the Rodriguez case, Feldman suggested, the conservatives on the court appeared eager to sanction the use of a drug-sniffing dog on that case’s facts, while the court’s liberal justices appeared to seek out parameters by which police interaction with motorists could be narrowed.

Feldman suggested an approach involving officers not exceeding the “mission” of the stop. Absent a common-sense approach from justices who have little contact with the common goings-on of the criminal-justice-traffic system, Feldman wrote, “you can expect a long wait and a barking dog the next time you’re pulled over for speeding.”

Supreme Court: Illegal for police to search your phone without a warrant