A chair is thrown in a cafeteria. What is your first reaction to that? Silly high school antics? Assault? Is this a crime? The North Carolina Court of Appeals had to deal with this very question. A high school student under the age of 16 threw a chair in the cafeteria of his high school and ran out of the room. A school resource officer followed the chair throwing student out of the cafeteria, snuck up on him, and grabbed him by his shirt. After being confronted about the chair throwing incident, the student claimed that he was just goofing around with his brother when the chair was thrown. Initially, the student was caught off guard being apprehended by the school resource officer, but calmed down within minutes of being approached and taken to a conference room. 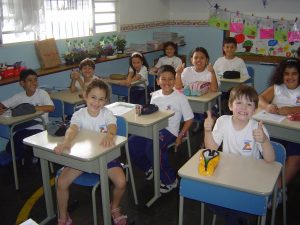 A district court in North Carolina found the juvenile student to be delinquent for both the disorderly conduct charge and resisting an officer. The student appealed this decision. The case was brought to the North Carolina Court of Appeals where it was determined that there was insufficient evidence to support either charge against the student.

Next, the court looked to the resisting an officer charge. This is a class 2 misdemeanor. The court found that there was insufficient evidence to prove that the student had reason to believe the school resource officer who grabbed him by the shirt following the chair throwing incident was a public officer. Additionally, there was no evidence that further demonstrated that the juvenile was resisting or obstructing the officer from doing his job after he was grabbed.

Being charged and convicted with a crime can be devastating. Being convicted as a juvenile can be even worse; it taints your record before you are even an adult. The criminal defense attorneys at Arnold & Smith, PLLC are here to help prevent these convictions. We know that there are false charges, and convictions, that occur often. We make it a priority to present every ounce of evidence possible in a case to get the most favorable outcome given the circumstances. If you find yourself facing criminal charges and need the help of an experienced criminal defense attorney in or around Charlotte, Lake Norman, or our new office in Monroe (by appointment only until 2019), please contact Arnold & Smith, PLLC today at (704) 370-2828 or find additional resources here.

What is a Conditional Discharge?