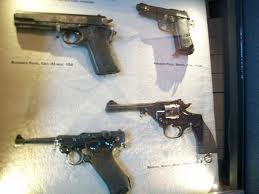 The Charlotte Observer recently published a report by the New York Times about the rise in the number of concealed carry permits. The report recounts an incident where an Asheville, North Carolina man had a hair-raising experience with the driver of an SUV.

Alan Simmons and his family were riding bicycles down the road when they were approached by a driver in an SUV. The driver was visibly upset with Simmons because he was riding his bike in the street. Simmons stopped and so did the driver. The two got into a verbal altercation, but the driver of the SUV, Charles Diez, pulled out a gun and threatened to shoot Simmons. When Simmons turned to leave, Diez fired, but the bullet passed through his helmet barely missing his head.

Diez was legally allowed to carry that weapon. He was licensed to carry a concealed weapon and Simmons believes that that is the reason why a verbal altercation nearly turned deadly. Diez was eventually arrested and he pled guilty to assault with a deadly weapon with intent to kill. The problem is not with the number of permits that are now being allowed across the country. The problem is the ease with which one can obtain a permit to carry a concealed weapon. North Carolina is one of many states that only requires a simple background check before allowing someone to obtain a concealed carry permit.

In addition to the ease of obtaining the permit, gun advocates are seeking to increase the places where guns are allowed. In the recent past, guns have been taken off of the banned list for bars, houses of worship, and college campuses. The argument in favor of increasing the presence of guns in public places is that gun owners should be allowed to protect themselves when they are out and about.

“These are people who have proven themselves to be among the most responsible and safe members of our community,” said Rep. Cliff Stearns of Florida. Rep. Stearns wrote a bill that would require states to recognize other state’s gun permits, extending the Full Faith and Credit Clause to gun permits. The House has already approved the bill and the Senate is expected to consider it next year.

One example is Charles Dowdle of Franklin, North Carolina, who was convicted of multiple felonies in 2006 for threatening to kill his girlfriend. He also chased her to her sister’s house and fired a shotgun through a closed door. Dowdle was sentenced to probation, but his concealed handgun permit was not revoked and only lapsed when it expired in 2009.

If you or someone you know is faced with defending your right to carry a concealed weapon, you should consult a skilled Charlotte criminal defense attorney. The North Carolina criminal defense lawyers at Arnold & Smith, PLLC will provide you with the best possible defense against any charges brought against you. For a free consultation, please contact Arnold & Smith, PLLC today at (704) 370-2828.