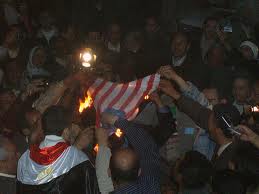 Four men have been charged with careless use of fire after a flag burning incident during an Occupy Charlotte protest. According to the Charlotte Observer, two American flags were burned outside of the campsite in protest of what the protestors labeled “American greed.”

Police say that the suspects were charged because they failed to use a fire pit to burn the flags. Those arrested were 19-year-old Alex Tyler, 20-year-old Stephen Morris, 23-year-old Michael Behrle, and 28-year-old Jason Bargert. Bargert, was acting as the spokesperson for the Occupy Charlotte movement.

Tyler said that the purpose of the flag burning was to send sparks through the camp. “I’ve seen this group lose its activism and become lazy,” said Tyler, adding that the other men told him, “We’re going to give Occupy Charlotte a wake-up call.” Well, the protestors got their wish. The movement is now divided over the incident. Several members thought that burning the flag was unnecessary and disrespectful and at least 10 members of the movement have issued formal statements disassociating themselves from the flag-burning episode. There was even some debate about expelling the men from the group. As of yet, there has been no word of whether the four protestors are still a part of the Occupy Charlotte movement.

The interesting part of this movement is that it does not have a leader, which means there is difficulty defining a collective vision. This is likely what led to the flag burning incident in Charlotte. A few members of the organization believed that the movement was lacking intensity and enthusiasm and they decided to give try to give it some life. Unfortunately for them, the rest of the group did not agree with their method of jumpstarting the movement and now the four protestors are facing possible expulsion.

While protests have been a part of the fabric of America since its foundations, protestors have also been getting arrested and charged since the beginning. Over the course of centuries, protestors have found themselves on the wrong side of the law and thus requiring the services of a criminal defense attorney. The members of Occupy Charlotte are likely going to need the services of a Charlotte criminal defense attorney and when they do, the attorneys at Arnold & Smith will be happy to assist them in mounting a defense against their charges.
Source
4 Charged after 2 U.S. flags burned at Occupy Charlotte site