An Arizona-based media company recently posted a video in the run up to Easter this year as a not-so-subtle reminder of the toll this holiday often takes on the animal kingdom. The video shows cratefuls of fluffy chicks cheeping madly as they are dunked repeatedly in colorful dye and roughly tossed like a salad. The now-viral video, filmed in an unknown part of the world, has sparked international outrage about animal cruelty. 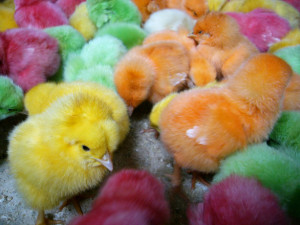 Some private sellers of the cotton candy-hued chicks, speaking to news sources on the condition of anonymity, admit to also injecting dye into their embryos before they hatch. This method at least spares the chicks from the dunking method described above, and if done with food coloring should not be chemically harmful to the birds (although at least one scientist admitted to experimenting with injecting chick embryos with a fluorescent dye used in making ultraviolet tattoos and giving the chicks to his nieces and nephews for Easter).

But what happens to the chicks when their pastel fuzz starts to fade, as does their novelty?

Some have pointed out that the treatment of the baby chicks in the dye video pales in comparison to how chickens and other livestock are treated in the food and agricultural industry. The unfortunate reality, however, is that the agricultural industry has imbued itself with such strong protections against animal cruelty in the legislature that it they are seemingly untouchable. So-called “ag-gag” laws in many states prohibit undercover activity, photography or filming on farms without the owner’s consent and mainly serve to target whistleblowers of animal rights abuses.

A similar law that went into effect on January 1, 2016 in North Carolina provides civil penalties of $5,000 per day for workers that make audio or video recordings or remove records from nonpublic areas of their work. The language of the law purports to protect property and privacy, but the law was passed to discourage undercover workers at agricultural farms. Its passage was spurred by a Perdue Farms contract worker’s conviction of animal cruelty after undercover animal rights activists filmed him and other workers stomping on and kicking live, injured chickens.

Outside of the agricultural industry, it is much easier to prosecute an individual for animal neglect, cruelty or abandonment, and Easter is the perfect time for a community-wide reminder of the realities of gimmicky pet purchases this time of year.

While baby bunnies and chicks (even if they’re not dyed) might make adorable basket-stuffers temporarily, animal shelters are overrun each spring with these animals that, once grown or having served their purpose for cute Easter-morning pictures, become unwanted. Shelters estimate that just as many of these animals never make it to the shelter and are simply abandoned.

In North Carolina, animal abandonment is a Class 2 misdemeanor, punishable by up to 60 days in jail.

Acts of animal cruelty in North Carolina also include injuring, tormenting, overloading or killing an animal.

Earlier this month, North Carolina created a new Animal Welfare Hotline that provides citizens with a new tool with which to report animal cruelty or neglect. The phone number is 704-370-2828.