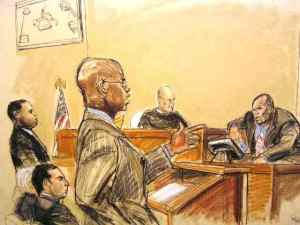 Simeon served as a catalyst for legislation that passed five years later which wrested some control over criminal case docketing away from district attorneys. While district attorneys still control many aspects of the criminal docket in Superior Court, N.C. Gen. Stat. § 15A-49.4—passed in 1999—provides some new safeguards for defendants.

Mecklenburg County—the Tar Heel state’s largest county, which comprises North Carolina’s 26th Judicial District—has adopted a criminal case docketing plan for Superior Court matters. It is available on the Administrative Office of the Courts’ web site. In addition, the county—or 26th Judicial District—has adopted local rules of criminal procedure for matters arising in District Court. The most recent plans were passed in 2010 and 2014, respectively. Mecklenburg County’s development and publication of a plan for District Court distinguishes it from many other counties and judicial districts and is perhaps an administrative response to the hundreds of thousands of cases that pass through it each year.

Locating management plans in smaller counties and judicial districts is more difficult. Most are not online, and some that are online only display pieces of their plans. In an article in the Campbell Law Observer last July, Maren Hardin suggested that “different levels of resources… available to small, rural counties” coupled with “the sheer volume of cases and defendants” may play roles in the approach each judicial district takes to establishing a plan pursuant to N.C. Gen. Stat. § 15A-49.4.

Contrasts are also found in different counties and judicial districts where the “individual personalities and interactions between judges, defense attorneys, and prosecutors” affect the manner and conduct of criminal proceedings, Hardin wrote.

Case management plans are only mandated under N.C. Gen. Stat. §15A-49.4 in Superior Court. That admonishment I detailed at the top of this article occurred in District Court. As the Administrative Office of the Courts’ web site still reflects, in that court, “[t]he District Attorney sets the criminal calendars[.]”

Following the rules the best course when visiting the courthouse