The U.S. Supreme Court is poised to have what many legal experts believe will be a blockbuster year, issuing a number of significant decisions. The docket appears packed with controversial and consequential cases. Last year the court was down a member following the death of Justice Scalia and the justices were not eager to accept potentially divisive cases given the odds of a 4-4 split. Now that Justice Gorsuch has been confirmed, the Court has ramped up its workload. 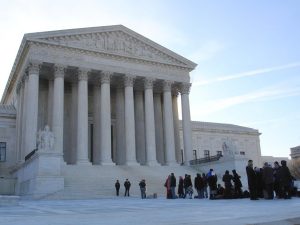 One case grabbing a tremendous amount of attention already is Masterpiece Cakeshop v. Colorado Civil Rights Commission. The case involves a baker in Colorado who argues that his free speech rights should allow him to refuse to bake a wedding cake for a same-sex couple. Many expect the decision to rest with Justice Kennedy, the reliable swing vote. Another headline-grabber is Gill v. Whitford, a case that could impact how legislative districts are drawn. The case concerns partisan gerrymandering and could conceivably cause the ideological makeup of Congress to shift.

Beyond these political and social cases, the Court also has a docket full of significant criminal cases. One particularly important case is Carpenter v. U.S. The case will seek to answer the question of when police officers are allowed to access a suspect’s cellphone location data. The issue began when cops tried to build a case against Timothy Carpenter whom they suspected of robbery. The police gathered cellphone location records and matched his movements to a number of robberies. The problem is the cops never bothered to get a warrant and instead relied on a law that allows them to access the data if they have a reasonable suspicion a crime was committed, a much lower threshold. The Court must now decide how far the police can go in extracting potentially sensitive location data from electronic devices. Given the increasing proliferation of these internet connected devices, experts believe the ruling will have profound implications.

The Court will also contend with two cases involving vehicle searches. In Collins v. Virginia, the Court will grapple with whether the broad powers police have to search vehicles extends to unoccupied vehicles parked on private property. In that case, police suspected that a stolen motorcycle might have been at Ryan Collins’ house and arrived to discover a motorcycle parked in the driveway covered by a tarp. They uncovered the bike and ran the plates and ended up arresting Collins. The question now is whether this was a lawful search or if, instead, it violated Collins’ Fourth Amendment rights.

In Byrd v. U.S., the Court must decide whether a reasonable expectation of privacy exists when a rental car is not in the driver’s name. In that case, Terrence Byrd’s girlfriend rented a car for him. He was later pulled over and the car searched, uncovering drugs and weaponry. Some courts believe that Byrd was owed no expectation of privacy, as the car was not in his name. Other courts have ruled differently, leaving the Supreme Court to settle the dispute.

Finally, the Court will also weigh in on a case involving qualified immunity. In D.C. v. Welby, a group of partygoers sued police after being arrested for attending a house party. The partygoers say they were invited by someone they believed owned the house; the police called the actual owner who said that no one had been authorized to be on the property. In D.C., the law says that to be arrested for trespass the defendant must have known that he or she was trespassing against the property owner’s will. This was clearly not the case and the partygoers later sued the police for wrongful arrest. The Supreme Court now has to decide whether the police officers will be protected from liability due to the notion of qualified immunity, which says that government officials are generally exempted from personal lawsuits for acts committed on the job. The subject has been ripe for review for years and many experts believe the Court is long overdue tackling a case that deals with governmental immunity as previous decisions have made it difficult for citizens to hold public officials accountable for misdeeds.