Three people in Shelby, North Carolina have been arrested due to their suspected involvement in a series of brazen ATM robberies. Let’s stop for a second and specify exactly what kind of robbery we’re talking about. The three are accused not of holding up customers using the ATMs, but instead of stealing the entire ATM itself. 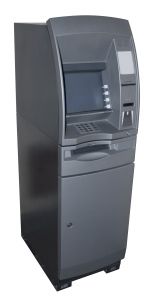 Police officials say that the arrests came after yet another ATM was ripped out of a Cleveland County convenience store. Believe it or not, this is not the first ATM the trio are accused of running off with. The three are suspected of being behind several thefts or attempted thefts in the area dating back to early December.

The most recent incident took place at Lisa’s Express convenience store, which is located on Washburn Switch Road. The store was equipped with surveillance cameras, which recorded the suspects arriving at the store in a stolen van. The group then drove the van through the front door of the convenience store and tied ropes around the ATM to pry it loose from the floor. Police say it took several attempts until the ATM finally was dislodged and they were able to throw it into the back of the stolen van and drive off.

Police from Shelby responded to the store alarm and saw a van matching the description given by a witness pass right by them. The officers pulled the van over and arrested two suspects while a third managed to get away on foot. The third person, Anton Smith, was apprehended later that afternoon.

Police say another ATM was stolen early last week in Lake Wylie and later found empty in Gastonia. The robbery occurred late one night at the Lake Wylie Mini Mart. Police say a vehicle crashed through the front of the building, smashing through bricks and a countertop. The thieves managed to get the ATM unbolted from the floor and into the back of the vehicle before cops could arrive.

Police say that the ATM itself was valued at around $2,000 and that it contained another $6,000 in cash. Officers believe that the store suffered an additional $3,000 in damages as a result of the break-in. Police say the ATM thefts are complicated robberies and require a high degree of skill to pull off. Police have also said they expect the three recently arrested to face serious criminal charges related to their involvement in the thefts given the many thousands of dollars that were stolen.

“Another ATM stolen from a local convenience store,” by Rad Berky, published at WCNC.com.