Police say that they are looking for a man they believe is responsible for a series of robberies that have impacted several local fast food restaurants over the past month. Authorities recently released security camera footage showing the man robbing several Cook Outs spread across the Charlotte area. 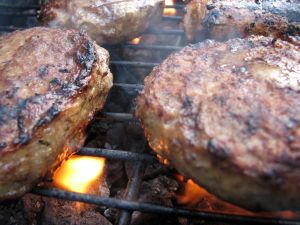 Police say that four Cook Outs and one Wendy’s were robbed over the past month. The Cook Outs in Lincoln, Mecklenburg, Union and Rowan counties have all been hit, with the first robbery happening just under a month ago. The most recent occurred this past weekend.

Police say they are thankful that no one has been injured in any of the robberies, but that disaster could happen at any time given the way the robber has behaved during the encounters. Authorities say that the burglar fired a handgun several times in at least two of the robberies, leading police to fear that the man might lash out if provoked.

Police say they believe the robberies are related because the description of the burglar has been similar in each case. Additionally, all the robberies happened early in the morning, around 7 a.m. Store employees have said that the suspect is a black man in his mid-20s with shoulder-length dreadlocks. So far he’s worn a ski mask, which obscures the bottom portion of his face.

In the first incident, witnesses say that the suspect shot out the glass of the back door to the restaurant, ultimately breaking down the door and demanding that the manager open the store safe and hand over all the money. In the second incident, the robber simply walked through the front door and demanded money from the clerks. In the robbery this past weekend, police say that the suspect again shot out a window in the back of the restaurant to gain entry.

Given the violent nature of the crimes, authorities say that when they catch the robber they expect to file serious criminal charges. Because a deadly weapon was used in commission of the robberies, the suspect can expect enhanced charges and possibly years behind bars.