A twenty-two-year old Florida man brought a scene from Joel and Ethan Cohen’s 1998 feature film The Big Lebowski to life last week by accidentally smashing up a stranger’s car in a fit of misdirected rage. 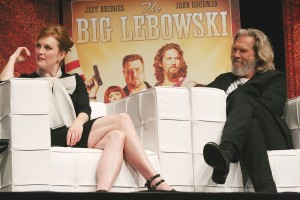 While characters “The Dude” (also known as Jeffrey Lebowski) and “Walter Sobchak”—played by Jeff Bridges and John Goodman, respectively—manage to carry off their hijinks without apparent criminal liability, the same hijinks—carried out in real life by Ryan T. Smith—produced a charge of felony criminal mischief and a potential penalty of five years in prison and fines of up to $5,000.

Thinking the delinquent Sellers stole The Dude’s car, The Dude and Walter Sobchak travel to Sellers’ residence, where they attempt to interrogate him. The interrogation fails when Sellers refuses to say anything in response to The Dude’s and Sobchak’s questions.

In typical fashion, the quick-thinking (and yet slow-witted) Sobchak removes his sport coat and promises to teach Sellers a lesson. He then take a golf club and begins smashing up a Chevrolet Corvette parked in front of Sellers’ house—a Corvette that both The Dude and Sobchak assume Sellers bought using money stolen from The Dude’s briefcase.

Only after smashing up the Corvette does Sobchak realize that the vehicle actually belongs to Sellers’ neighbor. The distraught neighbor takes the golf club from Sobchak and proceeds to smash up The Dude’s car in retribution.

In a case of life imitating art, Ryan T. Smith made a similar error in judgment, attacking the wrong vehicle in a fit of rage, according to the Bradenton Herald. The unnamed target of Smith’s rage said the Floridian had a vendetta against him and feared Smith might attack him or his vehicle.

Officers said that Smith caused $1,600 damage to the neighbor’s car.

It is not the first time life has imitated art, at least in Lebowski-esque wrong-car smashups. In 2014, a thirty-three-year-old man from Loughsborough in the United Kingdom was jailed for fourteen months after attacking a VW Golf, “denting the bodywork… shattering the windows and lights.. and slashing the tires and upholstery,” according to the Leicester Mercury. Only after his arrest did the man realize he had attacked the wrong car. He later acknowledged that the car belonged to the wrong person and felt “deeply sorry for the damage he caused in respect of this particular owner.”