Like countless mothers across the United States, Laura Strange spent two hours cradling her newborn daughter Haley in her arms. Unlike most mothers, however, the twenty-five-year-old’s ankle was cuffed to her hospital bed, and those first two hours with Haley were likely the last Strange will spend with her daughter for the next two years. 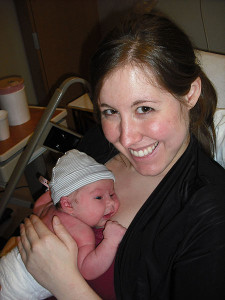 Strange is serving time at Valley State Prison in Chowchilla, California after being convicted of drug charges, according to the Daily Mail. She said being pregnant and being a mother wins an inmate no special privileges—not even the privilege of being able to be a meaningful part of a child’s life.

Strange was transferred from her prison cell to a local hospital when her labor began. A little more than two hours after giving birth, she was on her way back to prison. Her mother, Anita, will care for Haley while Strange serves out her sentence.

An estimated 120 inmates at Valley State Prison are pregnant at any given time, the Daily Mail and Atlantic Monthly report, with some 340 babies delivered annually to prison inmates. The State of California does operate programs that allow inmates in minimum-security settings to live with newborns. Space, however, is limited, and most inmates who give birth while incarcerated “are forced to give up their babies for adoption or foster care, or, in some cases, they give parental custody to friends or relatives.”

A number of interest groups are working to improve the plight of pregnant inmates. The American Medical Association, for instance, has declared that shackling women while in labor is “medically hazardous” and not in line with the “ethics of the medical profession,” according to the Huffington Post. The Women in Prison Project contends that shackling during labor increases the risks of injury both to mother and child. New York State outlawed shackling of pregnant inmates during and after labor in 2009, but most women-inmates interviewed by the Post who had given birth in New York since the ban went into effect said they were still shackled during their labor.

One woman interviewed by the Daily Mail, said she is seven months pregnant and serving a two-year sentence for distributing drugs. The woman—25-year-old Amber March—said her father and other family members had served out numerous prison sentences. She hopes things will be better for her child, but prison officials told the Daily Mail “that children born to criminal parents are… more likely to commit crimes themselves.”

Pregnant inmates, the Daily Mail reports, are given little opportunity for rehabilitation, which makes kicking drug and lifestyle habits all the more difficult once they are released.

A bill introduced in the North Carolina legislature last week could make life even more difficult for pregnant inmates in the Tar Heel State. Under the proposed legislation, a mother could be charged with a felony if her child is born “addicted to or harmed by the narcotic drug and the addiction or harm is a result of her illegal use of a narcotic drug taken while pregnant,” according to the Independent Weekly.

The proposal does encourage rehabilitation, however. Criminal prosecution can be avoided, in some circumstances, if the mother completes a drug-addiction recovery program, the Independent reports.