Long before Ferguson police officer Darren Wilson shot Michael Brown, and long before New York City police restrained an alleged untaxed-cigarette seller named Eric Garner, killing him and sparking a wave of protests nationwide, a Texas campus police officer shot and killed a 23-year-old college student outside his campus apartment after pulling him over for suspected drunken driving in circumstances that had some calling for a murder charge against the officer. 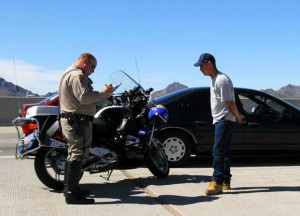 Last week, however, a Texas grand jury cleared the officer.

Cameron Redus was a student at the University of Incarnate Wood at the time of the incident, the Daily Mail reports. Corporal Christopher Carter pulled the 23-year-old over on December 6, 2013 after he said he spotted Redus driving across the Incarnate Word campus erratically.

Redus had been drinking on the night of his encounter with Carter. According to the Daily Mail, his blood-alcohol content was .155 at the time he was pulled over—nearly twice the legal limit. Carter pulled Redus over in the parking lot outside Redus’s campus apartment and ordered him to place his hands behind his back. Redus instead placed his hands on the hood of Carter’s patrol car.

While Carter was patting Redus down, Redus told the officer that he was scared and asked him if he was about to rape him. Video in Carter’s patrol car did not capture the encounter between the pair, but a microphone on Carter’s lapel captured their conversation and sounds of an apparent struggle for control after Redus refused to place his hands behind his back.

Carter alleged that during the scuffle, Redus managed to take hold of his police baton and struck him with it. Carter said Redus was the aggressor, and that he struggled to get Redus to comply with his orders and stand down from the confrontation.

After Redus called Carter a “piece of s***,” Carter can be heard filing six gunshots.

Redus’s family concede that the young man made some mistakes on the evening in question, but he did not deserve to die for those mistakes. They pointed out that Redus had actually made it home safely without injuring anyone as a result of his apparent drunken driving.

Carter was employed at the time by the University of Incarnate Wood police force. He has since resigned.

The University of Incarnate Wood released a statement after the grand jury’s decision saying that it hoped the audio recording of the incident would “put to rest much of the misinformation disseminated by persons characterizing the recording.”