A hit-and-run is a serious offense in North Carolina. Depending on how severe the victim’s injury is, the fleeing driver may be charged with a misdemeanor or felony. The at-fault motorist who fled the scene is more likely to be charged with a felony if the victim sustained life-threatening injuries or died as a result of the collision. In North Carolina, a felony may involve jail time for the offender. 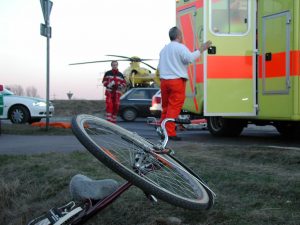 A deadly hit-and-run incident recently occurred in west Charlotte. As reported by WBTV on December 27, a bicyclist was killed after being struck by a vehicle on Glenwood Drive. After the collision, which occurred at 5:40 p.m., the driver of a gray Honda Civic sedan fled the scene.

A young male cyclist was in the roadway with life-threatening injuries when police officers arrived. The victim was pronounced dead at Atrium Health’s Carolinas Medical Center nearly 40 minutes after the incident.

Witnesses described the driver of Honda as a black male, possibly in his 20s. The vehicle was last seen turning onto I-85 with the bicycle still underneath it. Nearly two hours after the deadly hit-and-run accident in Charlotte, the mother of the suspect reported the crime to authorities. She wanted him to turn himself in.

The Honda Civic was recovered a short time later after the suspect’s arrest. The vehicle, which had been reported stolen, was found to contain drug paraphernalia.

Before the car crash involving a Charlotte cyclist, the Honda was traveling west on Glenwood Drive when it struck the bicycle, which was riding in the roadway in the 3900 block of Glenwood Drive.

Witnesses say the bicyclist was thrown onto the Honda’s hood and into the windshield, which caused the bicycle to become stuck beneath the sedan. The bicyclist fell off the vehicle’s hood into the roadway after the driver traveled a short distance before braking. The driver did not stop. Instead, he continued on Glenwood Drive before turning onto I-85.

According to the police report, neither excessive speed nor drunk driving was a contributing factor. The Honda driver was charged with felony hit and run, possession of a stolen vehicle, and possession of drug paraphernalia.

Hit and Run Penalties and Defenses in North Carolina

In North Carolina, you can be charged with a misdemeanor or felony for leaving the scene of a motor vehicle crash. The specific charge depends on the severity and type of injury caused by your actions and your criminal record.

Choosing the right defense strategy is of paramount importance when facing hit and run charges in North Carolina. You need a knowledgeable Charlotte criminal defense attorney to present your case in a convincing manner and make it more difficult for the prosecution to prove your guilt.

A successful defense can increase your chances of getting the charges dropped or reduced. The following defenses may apply to your hit and run case:

Talk to our lawyers from Arnold & Smith, PLLC, to determine the most suitable criminal defense strategy in your hit-and-run incident. Call at 704-370-2828 right now.

Contact our attorneys at Arnold & Smith, PLLC, to determine fault in your pedestrian accident case, especially if the other party says that your negligence contributed to the crash. Call at 704-370-2828 to explore your legal options or fill out our contact form. Now taking cases throughout North Carolina with offices in Uptown Charlotte, Mooresville and our new location in Monroe.