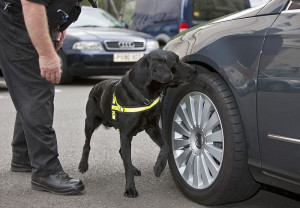 Absent independent, individualized suspicion of illegal drug activity, an officer may not prolong a traffic stop beyond the initial mission of the stop in order to allow a canine unit to sniff for drugs.

The case involved a Nebraska man named Dennys Rodriguez. In 2012, he veered onto the shoulder of State Highway 275 for a few seconds. Morgan Struble, a police officer, pulled Rodriguez over for violating Neb. Rev. Stat. § 60-6, 142, which prohibits driving on highway shoulders.

Rodriguez explained to Struble that he had swerved onto the shoulder in order to avoid a pothole. Struble ran Rodriguez’s license and registration, then questioned Rodriguez’s passenger, Scott Pollman, regarding where the men were coming from and where they were going. While Struble checked Pollman’s license on a records database, he wrote a warning ticket for Rodriguez and called for backup.

A search of Rodriguez’s vehicle revealed a large bag of methamphetamines. Rodriguez was charged with possession with intent to distribute 50 or more grams of methamphetamines. Before trial, he moved to suppress the evidence seized from his vehicle on the grounds that Struble lacked reasonable suspicion to conduct the canine search.

Rodriguez’s motion was denied, and lower appellate courts affirmed, ruling that officers could extend an otherwise-completed traffic stop, without reasonable suspicion of drug activity, to allow a canine unit to sniff a vehicle. The United States Supreme Court agreed to consider Rodriguez’s case in order to resolve conflicts in the manner in which lower courts had interpreted previous roadside canine-unit cases.

When a driver is pulled over for a traffic violation, the high court wrote, aside from writing a traffic ticket, an officer may check a driver’s license, determine whether a driver has any outstanding warrants, and inspect a vehicle’s registration and proof of insurance.

These activities are consistent with the mission of traffic stops: to ensure that vehicles are operated upon public roadways in a safe and responsible manner. A canine-unit sniff of a car is connected to the mission of detecting illegal drugs, and is not incidental to an officer’s functions when conducting a traffic stop.

The court rejected the Government’s argument that a de minimus delay—such as the seven-minute lapse in time between when Struble issued the warning ticket to Rodriguez to the point at which the canine sniffed Rodriguez’s car—could be sanctioned.

The practical effect of the Rodriguez case is that law-enforcement officers will likely curtail, to some extent, the use of canine units in traffic stops. The ruling will also provide rhetorical ammunition for defendants who challenge the deployment of canine units in their cases.