A 29-year-old terminally ill woman is shining her light on “dying with dignity,” a cause she hopes she furthers when she kills herself on November 1. 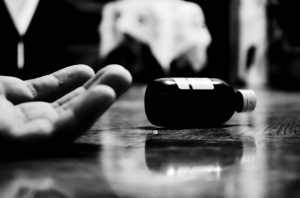 On that date, Brittany Maynard plans to take a lethal dose of a medication prescribed to her by a doctor. She said she plans to “painlessly fade away” in her bedroom, surrounded by her loved ones, with her favorite music playing.

Maynard was diagnosed on New Year’s Day this year with Stage 4 glioblastoma, a form of aggressive cancer that would end her life in a matter of months, her doctor told her. Maynard said she is not suicidal. “I want to live,” she told People Magazine, but there is no cure for her disease.

After doctors told her what would happen to her body during the final stages of her illness, Maynard said it was a relief to discover an alternative: Death with Dignity. Death on her own terms is an option because, Maynard said, she lives in one of the few states that allows it. Oregon’s Death with Dignity Act, passed in 1997, allows “terminally-ill Oregonians to end their lives through the voluntary self-administration of lethal medications, expressly prescribed by a physician for that purpose.”

Only five states have so-called “Death with Dignity” laws on the books. North Carolina is not one of them.

While the Tar Heel State has not considered suicide a crime since 1973, a person who assists in a suicide may be subject to criminal liability. Depending on the circumstances, a person assisting in a suicide could be charged with murder.

Then-91-year-old Sharlotte Hydorn of La Mesa, California, told the Daily Beast in 2011 that she was making nearly six-figures annually selling helium-based suicide kits. In one year alone, she said, she sold 1,600 of the kits. She sold one kit to 29-year-old Nick Klonoski. Unlike Maynard, Klonoski, of Eugene, Oregon, was not eligible for a prescription of lethal drugs because he was not terminally ill.

So he bought Hydorn’s suicide kit on the internet and rented a helium tank from nearby Party City. He killed himself on December 17, 2010.

Before she was stopped, however, potentially thousands of erstwhile healthy individuals may have taken their lives using her $60 kit, for varying reasons. A study that reviewed the findings of North Carolina’s chief medical examiner concluded that at least 10 relatively young men died of helium asphyxiation in North Carolina between 2000 and 2008. In each case, the helium appeared to be self-administered, and none of the men had a terminal illness.

“Suicide with pills” By Manos Bourdakis