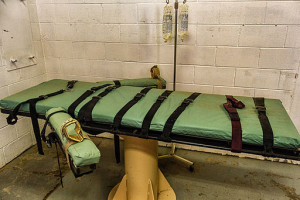 The State of Oklahoma ran out of Pentobarbital after its supplier refused to provide any additional doses of the drug. It could not obtain any more, in spite of “nothing short of a Herculean effort,” according to that state’s Assistant Attorney General.

So the state switched its protocol and used on inmate Clayton Lockett a three-drug cocktail including midazolam, which causes unconsciousness, vecuronium bromide, which stops respiration, and potassium chloride, which was supposed to stop Lockett’s heart. After the drugs were administered intravenously, a doctor determined that Lockett’s vein had collapsed and not enough of the drugs had been administered to kill him. The Oklahoma Department of Corrections did not have enough additional drugs on hand to finish the job. According to witnesses, Lockett was seen writhing in pain and was still alive, with his head lifted, when officials closed the blinds on the execution chamber. Lockett died a short time later of a heart attack.

The Lockett execution followed the Jan. 16 execution of an Ohio man who could be seen gasping and choking after being administered a new drug cocktail and the Jan. 6 Oklahoma execution of Michael Wilson, whose last words were: “I feel my whole body burning.”

The question, from a Constitutional standpoint, is whether Pentobarbital or drug-compound-substitutes constitute “cruel and unusual punishment.” The 8th Amendment to the United States Constitution prohibits the infliction of punishment that is “cruel and unusual.” The lawsuit brought by North Carolina death row inmates against the Secretary of the Department of Public Safety and the warden of Central Prison alleges that North Carolina’s execution protocol violates their 8th Amendment rights.

Alex Kozinski, chief justice of the United States 9th Circuit Court of Appeals, suggested after an alleged botched execution in Arizona earlier this year that “If we, as a society, cannot stomach the splatter from an execution carried out by firing squad, then we shouldn’t be carrying out executions at all.” Kozinski said a firing squad would inflict instant death, without fail.

These battles over the death penalty are being fought largely around the margins—focusing on whether the manner in which death is inflicted is “cruel and unusual” and whether one drug cocktail is better than another. Perhaps as a state and as a society we need to address the big question: Are we going to execute people? If not, then perhaps we should take up the ideas of the North Carolina Conservatives Concerned about the Death Penalty.

If so, perhaps Judge Kozinski has a point.