Arrests of anti-abortion protesters in multiple North Carolina cities, including Charlotte, made national headlines, prompting many high-profile politicians to accuse the police of violating the arrested protesters’ constitutional rights. 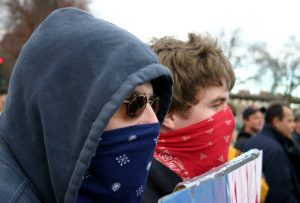 So, were those arrests unconstitutional? Or do the North Carolina police have the right to arrest people for violating the state’s stay-at-home order, particularly the ban on mass gatherings?

Charlotte Anti-Abortion Protesters Sue the City for the Arrests

As reported by the Charlotte Observer, the leader of abortion protesters in Charlotte sued the city and Mecklenburg County for the arrests. While anti-abortion protesters themselves claim that their gathering was in compliance with the state’s public safety guidelines, including social distancing rules, eyewitness accounts differ as to whether the protesters were actually following the order.

Let’s dig deep into the issue and determine whether the arrests violated the protesters’ First Amendment rights.

Previously, we discussed whether you can be arrested for threatening or attempting to spread COVID-19.

Arrested for Protecting or Violating the Stay-at-Home Order?

While the protesters themselves claim that they were arrested for protesting, the police explained that the arrests were made for violating the state’s stay-at-home order, which was issued by Gov. Roy Cooper and took effect on March 30. In particular, the order bans mass gatherings of more than 10 people to slow the spread of the coronavirus disease.

The police have the right to enforce the stay-at-home order or any other executive order by the state of North Carolina, but only as long as they are doing so in a non-discriminatory manner. Given that the anti-abortion protesters in Charlotte sued the city for the arrests, it will be up to courts to decide whether the police violated the protesters’ constitutional rights.

The arrests prompted many North Carolinians to wonder, “Does the stay-at-home order take away my constitutional rights?” The short answer is yes. While the stay-at-home order or the state of emergency itself does not take residents’ constitutional rights away, it does let the government and law enforcement agencies do things that might violate or infringe on residents’ rights.

However, in some cases, the government and law enforcement can go too far with those orders and cross the red line. Typically, only the courts can determine where the line is.

In the case of Charlotte’s anti-abortion protests, police said they saw a “large crowd” upon their arrival. The protesters allegedly violated the state’s stay-at-home order, which caused the police to ask everyone to leave. While most protesters did leave, 12 of them refused to go. They were issued a written citation. Four of them left, but eight still remained and were arrested.

Thus, the protesters were not arrested specifically for engaging in a constitutionally protected act (protest), but for violating the state’s order. Those were not the only criminal charges in Charlotte in connection with violating the state’s stay-at-home order. According to WBTV, police cited a spa that remained open in violation of the order mandating the closure of non-essential businesses.

The arrests of anti-abortion protesters and the criminal charges against the Charlotte spa indicate that anyone can be arrested or face charges for violating the state’s stay-at-home order. Contact Arnold & Smith, PLLC, to consult with our attorneys if you were arrested for violating North Carolina’s stay-at-home order. Call our lawyers at Arnold & Smith, PLLC, at (704) 370-2828 to evaluate your options or fill out our contact form. Now taking cases throughout North Carolina with offices in Uptown Charlotte, Mooresville and Monroe.

Can You be Arrested for Threatening to Spread COVID-19 in North Carolina?