Charlotte DWI Lawyer Brad Smith answers the question: “What am I obligated to do if I’ve been pulled for Drinking and Driving?”

The United States Supreme Court has had a busy last few weeks when it comes to the Fourth Amendment. Two of its most recent opinions in particular underline how unpredictable the nation’s highest court’s decisions on search and seizure rights are after the death of Justice Scalia. 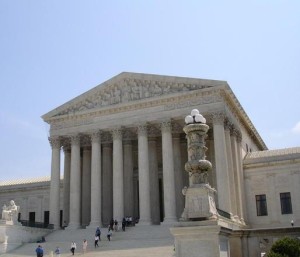 The late Scalia, who passed away this February, was known for his conservative interpretation of the Constitution that favored small government. He might not have viewed the Constitution as a document that should evolve with the times, but he also was a fairly strong proponent of an individual’s privacy rights against government intrusion.

With Scalia’s departure, and with no ninth justice yet appointed, it seems to be a toss-up which way the eight-justice Court will vote on search and seizure issues. The two most recent cases demonstrating this are Birchfield v. North Dakota and Utah v. Streiff. This post will discuss the former, and next week we will discuss the latter.

First, the case with good news, although it likely will not have an impact on those arrested in North Carolina. Birchfield v. Dakota held in a 5-3 decision that police officers cannot conduct a warrantless blood test of a person pulled over for driving while impaired (DUI/DWI), if that state makes it a separate criminal penalty to refuse a blood test.

Despite what some media have been reporting, this opinion did not actually provide a blanket rule that police cannot perform DUI blood tests without a warrant.

The language of the three original defendants’ challenge claimed it was unconstitutional for their states, Minnesota and North Dakota, to criminalize refusal to submit to a blood alcohol content (BAC) test. All 50 states have “implied consent laws” that require drivers to submit to BAC tests if pulled over on suspicion of or arrested for impaired driving; by driving on the state’s public roads, you give your implied consent to the test as a matter of public safety.

In many states, like North Carolina, the penalty for refusing a BAC test with law enforcement is a civil penalty, such as having your license revoked for a period of time–in North Carolina, this period is one (1) year. However, other states such as Minnesota and North Dakota, have actually made it a separate crime to refuse these tests.

The defendants in Birchfield brought their case to the Supreme Court arguing that it was a violation of their Fourth Amendment rights against unreasonable search and seizure for their states to criminalize refusing a BAC test. So while the Court’s decision for these defendants was that the warrantless blood test was indeed a violation of their rights, this was actually a narrow opinion. It does not mean that civil penalties–like having your license suspended for a year–for refusing a blood test are unconstitutional. It also does not mean that law enforcement will actually always be required to have a warrant to test someone’s blood for alcohol.

Law enforcement prefers blood tests over breath tests in situations where an individual has consumed impairing substances besides alcohol, or if the person is unconscious and a breath test cannot be performed. Police are allowed to claim an emergency exception to the warrant requirement when a person is unconscious called the “destruction of evidence” exception. It means that if police waited, evidence of the person’s crime, i.e. their intoxication level, would diminish, so police are allowed to conduct the blood test without a warrant.

It is very likely that nothing about the Birchfield decision changes that. Each of the defendants was either criminally prosecuted for refusing the blood test, or submitted to the test after being informed that they would be criminally prosecuted for refusal. The Court just said that threatening motorists with separate criminal–but not civil–penalties for refusal to take a blood test was an unconstitutional violation of search and seizure rights.

Further, the Court also clarified here that law enforcement do not need a warrant to conduct a breath test on a person pulled over for suspicion of impaired driving.