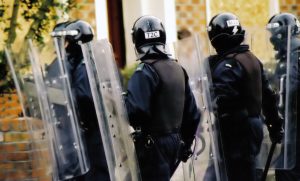 What is Disorderly Conduct?

Disorderly conduct may therefore apply to someone who is involved in a sit-in or protest. Public urination and public drunkenness also fall under the category of disorderly conduct. The charges may be somewhat of a catch-all when the behavior does not fit into the definitions of other crimes.

Rioting and Drunk and Disorderly

When you participate in a riot, it could lead to a charge of disorderly conduct, particularly if you fail to disperse when requested to do so by law enforcement. A riot is different from a public assembly in that a riot involves three or more people gathered together to threaten, incite, or cause violence. A drunk and disorderly charge could result from activities such as fighting, swearing, or blocking a building entrance or street. You could be charged if you participate in this activity in public, even in a privately owned space.

There are ways to defend charges of disorderly conduct. The best defense depends on the many variables of your particular case. Your attorney will review the charges and the evidence against you to help evaluate your defense options. If you were involved in a protest, you may be able to assert your constitutional rights. In some cases, you may be able to prove self defense in the situation. Sometimes, the evidence against you is weak or mistakes were made that will disallow it in court. In some cases, the prosecutor will agree to drop the charges completely after discussing the matter with your attorney.

If you or a loved one is facing disorderly conduct or other criminal charges, we can help. Please contact us today to get a phone, video or in-person consultation by calling at (704) 370-2828 to speak with our detail-oriented and well-versed lawyers with offices in Charlotte, Lake Norman, and Monroe, please contact Arnold & Smith, PLLC today or find additional resources here.

Should I Take a Plea Deal?

What are Misdemeanors in North Carolina?