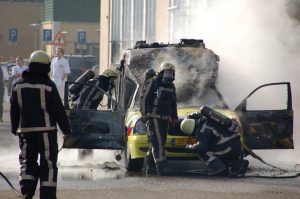 Generally, drivers convicted of a crime after leaving the scene of a motor vehicle crash may face a suspension of the driver’s license and even jail time.

Given the severe punishment for failing to stop at the scene of an accident, it is advisable to contact a criminal defense attorney if you have been charged with hit-and-run in North Carolina.

What is a Hit-and-Run in North Carolina?

A hit-and-run is failing to stop your vehicle at the scene of a car accident. Under N.C. Gen. Stat. § 20-166, North Carolina drivers have a legal duty to:

While waiting for the police at the scene of the crash, you must exchange contact information with everyone involved in the collision. In addition, if anyone has been hurt, you must call for emergency medical care.

What Penalties Can You Face for a Hit-and-Run in North Carolina?

Most hit-and-runs in North Carolina are classified as a Class 1 misdemeanor. You can face misdemeanor hit-and-run charges when any of the following is true:

Misdemeanor hit-and-run is punishable by fines and a jail sentence not exceeding 120 days.

You can face felony charges for leaving the scene of an accident if you cause:

For the purposes of sentencing, an injury is considered “serious” when it:

What are the Possible Defenses to Hit-and-Run Charges?

Just because you have been charged with a hit-and-run in North Carolina does not necessarily mean that you will be convicted. You may still have a chance to get the charges dismissed or reduced.

To fight against hit-and-run charges, you need to consult with a skilled criminal defense lawyer to choose an appropriate defense strategy which may include:

There may be other defenses to hit-and-run charges depending on the circumstances of your accident. Consult with North Carolina criminal defense lawyers at Arnold & Smith, PLLC, to identify possible defenses in your unique case. Get a phone, video or in-person consultation by calling at (704) 370-2828 to speak with our detail-oriented and well-versed lawyers with offices in Charlotte, Lake Norman, and Monroe, please contact Arnold & Smith, PLLC today or find additional resources here.

Hit-and-Run Charges in North Carolina: What are the Defenses?